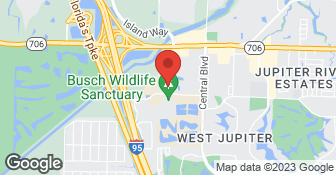 Repairing guitars, bass, and all fretted instruments. Decades experience, humidity controlled shop, equipped with the only PLEK Machine in Florida for the most accurate fret work possible.

the price for the mandolin was in excess of $3500. The pickup was installed, and the mandolin arrived in Scotland safely. There were some scratches on the mandolin that we were not made aware of. The strings were rusty, which was a real surprise because the luthier had to remove them to install the pickup. The fretboard was filthy, and the frets themselves were tarnished very badly. You need to remember that we are 5000 miles away from the shop so the whole transaction was done over the phone. Perhaps they treat local customers with more respect. I will not purchase anything else from this shop ever again.

Description of Work
A high end mandolin was purchased and a pickup was installed.

Description of Work
Refretted my 81 year old guitar, and used their Plek machine to level the frets, followed by a superb fret dressing.

Description of Work
Purchased a new Bass Guitar from Graham at Wolfe. Incredible store with only the best quality instruments and equipment. Excellent knowledge and very friendly. Wolfe Guitars is our go to store for Guitars and Lutherie services. Highly recommend!

I saw the youtube video of their luthier, Jan Walker's, use of the PLEK machine and was impressed by it - Wolfe guitars seemed to be a place where precision and competence abounds. It is in an industrial park which seemed a bit odd since I assumed a retail establishment would be in a commercial setting. When I walked in, the lighting was very poor and thought it would be difficult to see the beauty (or lack thereof) of a guitar in such poor lighting. I brought my Taylor 814-CE in for re-fretting and PLEK-ing and spoke to Jay Wolfe, I started to have my doubts when he asked me if I wanted a larger gauge steel for the new frets because and quot;Taylor frets don't last very long.and quot; Although I agree with that assessment, I assumed that a larger gauge would require them to cut into the fret board - something I couldn't imagine anyone doing and which would decrease the value and originality of the guitar. I told him that I wanted the same gauge steel. Then he told me it would take four to six weeks! I asked if I could meet Ms. Walker, and was told that she was not in. I left the guitar with them on a Thursday and then called the next day asking to speak to Ms. Walker and was told again that she was not in. I called again on Monday and was told the same thing. I went back that day to pick up my guitar telling them that I changed my mind and they (a man with an English accent) said he couldn't find it - after about a half hour of looking for it he told me that it was already and quot;sent out for repairand quot; and that the repairs are done and quot;at a different location.and quot; I asked for the address of the other location and then he went in the back and found it. If they want to post a video of their top luthier doing her work, she should be at the business to answer questions. I love my guitar and all the other ones I own and wouldn't bring any of them to a place that is this disorganized and not what they appear. I only want to bring my guitars to a place where the repairs are done on-site. I also want to be able to speak directly to the person who will be doing the work. They seemed to care less about the fact that I changed my mind about having them do the work. I instead sent my guitar back to Taylor Guitars in California and was very pleased with their work and which only took three weeks to complete.

Description of Work
no work was performed

I was pleased with the guitar setup, especially as the guitar I brought to them was below average in quality. Their technician did the job quickly and professionally, and it came out of their shop better than I expected it would. Nice quiet showroom and Mr. Wolfe was very helpful and knowledgeable.

Description of Work
Wolfe did a complete set up and restringing of an electric guitar I owned and also sold me several sets of guitar strings as well.

I most recently took my guitar in for an anaylsis and set up focusing on the neck. Jan Walker is excellent there, the best luthier that I have known. She has great technology to really anaylize the instruments down to the curvature of the neck For the mandolin, she had to take all of the hardware off to have it retouch and did a great job. She separated all of the parts very neatly and packaged them so I have all the hardware neatly stored. Now that it has been restored, I'm going to take it back to Jan to put all of the hardware back on. I can't say enough good things about her and Wolf Guitars.

Description of Work
I take my guitar and mandolin to Wolfe Guitars for Jan Walker to repair.

How is WOLFE GUITARS overall rated?

WOLFE GUITARS is currently rated 4.1 overall out of 5.

What days are WOLFE GUITARS open?

No, WOLFE GUITARS does not offer a senior discount.

Are warranties offered by WOLFE GUITARS?

No, WOLFE GUITARS does not offer warranties.

What services does WOLFE GUITARS offer?