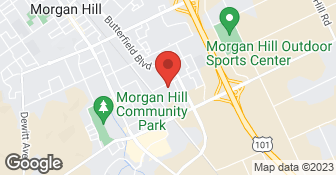 All work LIFETIME GUARANTEED. We work with all insurance companies to represent you. We make sure you get quality repairs and you are informed when insurance companies are trying to put inferior parts on your car. We can also test the metal to be sure the parts are factory strength.  …

Do not take the suggestion of your tow truck driver. Do get a reference from a friend. Do not rent a car from an agency that shares the same space with the repair shop. Go somewhere else. Do not accept suggestions from the auto body writer. Insist on replacement of parts that are obviously impossible to repair.

Description of Work
My expense was limited to $500 deductable (plus the cost of a rental car). The repair charges were considerably more. My car was in an accident on Butterfield Blvd, in Morgan Hill in April of 2008. At the suggestion of the tow truck driver, I allowed my car to be towed to this shop. I had been very shaken in the accident, and was not very particular about where my car was taken. My car was rear-ended by another car, then driven into the back of a large Caddy. There was damage to the front and rear. I was particularly concerned about the rear hatch in my 2003 Toyota Cienna Mini-Van, since it had been smashed in, and the frame had a lot of damage. The owner, Paul, said that he would order a new door for the hatch. I asked about the panel which held the door frame, and he assured me that he could fix it as good as new. I was doubtful. He said he could order a new one, but that the insurance company would not like it. I capitulated. I have regreted it ever since. It does close and latch, but within a year, it developed a constant rattle. It still rattles to this day. I am used to the high quality of Toyota vehicles, rattles are non-existant in them. Well... not any more. It is now 2011 and I rattle down the road every day. Also, it seems that Toyota paint had not been used on my car. The repainted panels are a darker shade than the rest of the car. So, I drive a multi-color vehicle. I believe I was persuaded by the owner, to accept less than adequate work. It was at least 6 weeks before I got my car back. Meanwhile I was renting a car at my own expense, since a rental car was not covered by my insurange. Since the car rental agency was in the same building and shared a loby with Advanced, I can only wonder if there was some sort of back-scratching going on.

Car had been vandalized; a rock was thrown, breaking the window, and damaging the center console and the seat belt panel. Advanced sister company, GlassPro, repaired the broken window, and they did the body work (damage repair, painting, and interior fixes.) Everything looks better than the day we bought the car. After the insurance adjuster had given us our check, we found some additional damage ...