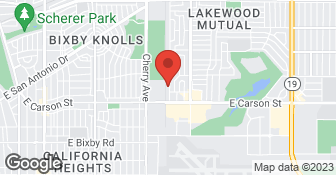 I chose Bon Voyage Transportation because they had the most positive reviews on the web, despite the fact that they had the fewest number of reviews. Sam, the owner, seemed reasonable and reassuring when I called for reservations. I told him there would be six adults and we were flying international. I wanted to make certain that the van we were reserving would have enough room for luggages because we are allowed 3 per person for a total of 18 pieces. We were volunteers on a mission and brought along 6 medium-sized boxes filled with old clothes and stuffed animals to be donated. The driver showed up on time. Immediately, upon arrival, the driver came out of his van yelling about how he was never told of the boxes, that they would not fit in the van along with the rest of the luggages, and that I deliberately "lied" to Sam when I made the reservations because I never mentioned that there would be boxes. True, I did not specifically state that there would be boxes - the thought never even crossed my mind because the total number of pieces were still 18, including the luggages. The driver demanded to be paid another $40, in addition to the originally quoted price of $110 in order to make the pieces "fit." The attitude of the driver was one of incredible rudeness and something I had never experienced before, especially in a service industry as this. The boxes and the luggages did fit despite the ranting and raving from the driver. When we arrived at LAX, I not only paid the additional $40 but also tipped him $20 in hopes of "shaming" him into behaving better the next time. To my disappointment, the same driver showed up again to pick us up upon our return. Even after the undeserved tip he received previously, he was still inexplicably rude and we rode home in silence from the airport. Once we got to our house, I tipped him $10, to which he managed to utter "thank you" - the only words he ever said the entire trip. I will never use Bon Voyage Transportation again and would never recommend them to friends or family. In a service industry such as this, there is no room for this type of inappropriate behavior/verbal abuse, especially when airport transportation services are a dime a dozen and the consumers have more than plenty to choose from.

Description of Work
We used Bon Voyage Transportation as a private van service from Orange County to LAX and from LAX back to Orange County.

Bon Voyage Transportation is currently rated 2 overall out of 5.

No, Bon Voyage Transportation does not offer eco-friendly accreditations.

No, Bon Voyage Transportation does not offer warranties.