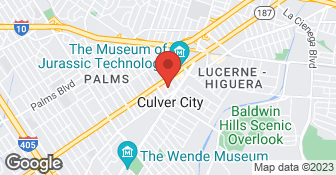 It went terribly! They admitted my mom to the hospital and over the next 10 days, they made errors on her tests, got the medication wrong, served known allergic foods to her and had huge attitude problems when these things were brought to their attention. At one point, two hours after my 84 year old mother had returned from surgery, an attendant came in with a gurney to take her to a STRESS TEST! ...

Description of Work
My Mom was having breathing problems and we took her to Brotman Emergency.

i saw dr. samsarian a few other times, at the brotman medical center, between 1994-2012. and he either gave me the evil eye, or typically refuse to help me and get involved with my depression and suicidal ideation and dismissed me as paranoid schizophrenich.

Description of Work
Dr. samsarian, at brotman medical center, emergency room stick my left knee with his sharp writing pen. dr. samsarian did strike me with his writing pen for two reasons: his diagnosis at the emegency room was over ruled and i was admitted into the P6, psych ward unit for suicidal ideation since october 1994 and for clinical depression. so , dr. samsarian , an iranian-american doctor got angry at me and got hateful of me because i am also an iranian-american citizen, and that i was writing and making these same notes about him and other iranian psychologist starting with dr. hekmat in 1994. therefore, dr. samsarian hit me with his pen, to threaten me and make me silent about dr. hekmat, dr. rahimi, dr. noddel from los angeles county, california.

Dr. Michael Eisner who performed the tube extraction of the overdose pills, said on his telephone report " that i was a 34 year old Arab, UCLA student, suicidal, paranoid schizophrenic, psychotic, manic, bi-polar, terrorist activity.In fact, i was a 24 year old persian, iranian, UCLA student with a valid california identification and student identification in his hands.during the emergency procedu...

Description of Work
i tried to commit suicide for the first time in my life, living with family and going to school and working at age 24 years old. After i tried to overdose, because i did not want to make a bloody scene, and it was the safest way to kill myself without hurting anybody else around me. i called ( 911 ) and the paramedics took me to Brotman Medical Center, three blocks away from our residence.

So I have to hear from a collection agency despite my NOT IGNORING the statements from Brotman but asking for itemized statements and the billing department sending my statements to the wrong address not once, not twice, not thrice, 4 times! I hear this all standard practice to collect for facilities but if I get a bill that does not explain to me what service was rendered or product purchased, I ...

Description of Work
I did not go to Brotman Medical Center, instead I went to a physician whose clinic is apparently part of Brotman. I not only have to pay the doctor's fees but a separate facilities fee even though I never set foot in the Brotman Medical Center, saw any of their doctors or nurses or other staff. Also, it was not clear that these charges would be forthcoming, my insurance company doesn't cover such "services" and to top it all, Brotman very "efficiently" and without much discretion or compassion sends outstanding accounts to a collection agency. This despite 1. my contacting the Brotman billing department several times every few weeks and sometimes every month depending on the last conversation with billing, and speaking to staff, 2. Brotman sending bills to my old address, taking down the wrong address when I've updated it - 3 times!, 3. My receiving the statements I've requested explaining the charges AFTER getting notices from a Collection Agency.