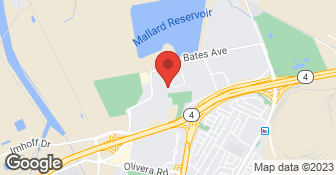 For a change a contractor that actually showed up on time and did a professional job. They come the first day and cleaned the drain line and on the second day a plumber came to fix the problem I had with a bathroom faucet which had become clogged with debris when the city shut off and turned my water back on. Both service people were very professional and got the job done quickly and easily.

Description of Work
cleaned out a clog in the main sewer line and fixed the hot water value in the tub.

IT WENT QUITE WELL THE FIRST TIME AND I REQUESTED JUDE TO HANDLE THE SECOND PROBLEM. THE FACT THAT I USED HIM TWICE SAYS IT ALL. NO PROBLEMS...ARRIVES ON TIME, WORKS QUICKLY AND NEATLY.

Description of Work
I HAVE HAD JUDE BEST DO WORK FOR ME ON TWO OCCASIONS. ONE FOR EVALUATION AND TREATING OF SEWER DRAIN TO MY SEPTIC TANK, THE OTHER TO RUN A CLEAN OUT ON A SIX INCH STORM DRAIN CARRYING WATER FROM THE HOUSE TO AN AREA 60 FT AWAY. HE IS STRONG AS A BULL, KNOWS HIS PLUMBING, AND IS MINDFUL OF THE COSTS.

First, thank you for using our company. We appreciate the work. Secondly, I read this review to Jude this morning and it put a huge smile on his face. Best of luck moving forward.
1.0

They misdiognised the problem with the sewer line and after they haad said what they are going to do, they said they were going to replace the whole sewer line. It was going to cost 6000$. I told them I was not going to pay 6000$. I asked them so I pay per hour for what they had done. Then they called their supervisor and he said we can put the sewer clean out and I can pay the 900$. I would not recommend them. I did not like their professionalism.

Description of Work
They did the sewer line.

It was just some simple work and they were very good. It was normal rates; it wasn't anything that stood out or shocking. They were very responsive.

Description of Work
I used Roto-Rooter for plumbing work. One of the handles on the pipes didn't work and they took care of that.

The service technician arrived at 8:15 AM, attempted to unclog toilet found roots between bees wax ring and flange. Toilet still clogged. Took toilet outside still unable to unclog. Since old toilet could not be unclogged we decided to purchase a new low flow toilet which Joseph Caron, the service technician, picked up from the hardware store ,delivered, installed and took away old toilet. He departed at 10:55. The new toilet works great. Joseph informed us that the local water company offered rebates to customers replacing old toilets with new low flow toilets for which we have applied.

Description of Work
One of the toilets became clogged. I called Rotor-roooter at 3 am. They suggested that they schedule a technician after 8:00Am because the rates were lower although they could come immediately. I asked them to come as soon as they could after 8:00 am. They arrived at 8:15and took care of the problem as described below.

It went well, they took care of business and were on time. Very courteous, and all the people that we worked with over the two week time frame were very good.

Description of Work
They came out to fix a leak

I have used them many times to clean out plug ups in the sewer line and they have come back during the warranty period at no charge. This last visit included a camera view of the sewer line to identify problem areas. I'm going for the relining of an old sewer line under the house.

On Saturday morning I noticed that my sewer branch line, which runs downhill from my house through my back yard to a sewer main about 200 ft. away, was leaking about 150 ft. downhill from my house. I called several providers, but Roto Rooter was the only one who said they could get to it that day. I tried to describe the problem and the layout of my line, indicated that the problem was all outside. They told me they would be there between 5:00 and 7:00 pm. I understand that when you're the last appointment of the day, they will probably be late. However, Brian arrived at 9 pm, by then it was full dark. He couldn't work from the cleanout closest to the clog because it was dark, and he didn't have a long enough power cord. He snaked out the line from a cleanout up near the house. The drain was running when he left, and he suggested a video inspection, and also recommended an expensive bottle of enzyme pipe cleaner which I purchased. On Monday, I called the office to make an appointment for a video inspection first thing Thursday morning. I made a point that we needed to be the first appointment on Thursday because I had to leave for work later in the morning. The office person that I spoke to promised they'd be there between 8:00 and 9:00 On Thursday morning the drain was stopped up again. I called the office shortly after 8:00 to let them know that they'd have to clean it out again before the video inspection, and they told me no problem. At 9:10, when no one had arrived, I called the office and they told me the technician was on the way, and was only a few blocks away. At 9:35 when I called again they said they had a and quot;misunderstandingand quot; and the technician had been dispatched to another job, and that they would try to get some there by the late afternoon. These people have a serious problem with punctuality and scheduling, and also they lied when they told me the technician was on the way. Also, they charge by the hour, instead of by the job. I expect that there will be an extra charge for weekend service, and I was happy to pay it, but I would like to know the cost before comitting to the work. Both the initial (weekend) work and the video inspection were to be an hourly charge. I have had another company come out, clear the drain and do a video inspection for a fixed price. I have also hired that other company to replace a section of the sewer line that is clogged by roots and causing the problem. I will not use Roto Rooter again.

Description of Work
Brian snaked out my sewer line. There was a blockage quite far down the line from my house. I made an appointment for a follow up video inspection, but they never showed up. I will never use this company again.

Called and got immediate response. Scheduled work on the same day. Showed up at appointed time. Unplugged stopped up sewer quickly and efficiently. Cleaned up the mess left by the overflow. Was pleasant and businesslike. Job was done within an hour. Charged Sunday rates, but that was to be expected. Excellent work ... no problem since then with the drains.

Description of Work
Came out on Sunday to unplug sewer

I discovered a sewer line blockage, and by coincidence, happened to have Plumbing Company X (I don't want to name them) working on an unrelated plumbing fixture under warranty. Company X snaked the line and found roots. I got bids from Company X, from another Angie's List company (Company Y) and from Roto-Rooter, an Angie's company. All three believed that the line needed a and quot;pipe burstand quot; to fix the broken line. Company X bid $6700 plus permit costs (which would have pushed it over $7,000). Company Y bid $9,990 , after an and quot;Angies list discountand quot;, but refused to honor its own Angie's coupon for $3000 maximum because they said the sewer line was more than 5 feet deep in the street (it wasn't). Roto Rooter bid $5400, including all permit fees. They came when promised and did an excellent job. When they dug the hole in the street to access the sewer, they saw that the line wasn't broken. Only a conector had broken where the line met the main, so they simply reconnected it and did the other work and closed up the hole and paved it. They also reduced the bill because the repiping wasn't necessary after all. Quick service, low bid, concern for the customer and honesty. What else could you ask for? Brian was the main plumber (along with his brother) and were excellent.

Description of Work
Roto-Rooter Concord to the rescue. Lowest bid and quick response.

We specialize in excavation services, lot clearing, asphalt paving, sealing, and more! We guarantee your satisfaction, and we won’t leave until the job is done right. We pride ourselves on the quality work we provide, while delivering great customer service! Check out all the services we offer below and call -or- click to schedule a free estimate today!  …

We offer full handyman services and specialize in air duct, dryer vent and furnace cleaning. Services do not include work above $500  …

How is Roto-Rooter Plumbing and Drain Cleaning overall rated?

Roto-Rooter Plumbing and Drain Cleaning is currently rated 4.5 overall out of 5.

What days are Roto-Rooter Plumbing and Drain Cleaning open?

What payment options does Roto-Rooter Plumbing and Drain Cleaning provide

No, Roto-Rooter Plumbing and Drain Cleaning does not offer eco-friendly accreditations.

Does Roto-Rooter Plumbing and Drain Cleaning offer a senior discount?

No, Roto-Rooter Plumbing and Drain Cleaning does not offer a senior discount.

Are warranties offered by Roto-Rooter Plumbing and Drain Cleaning?

What services does Roto-Rooter Plumbing and Drain Cleaning offer?