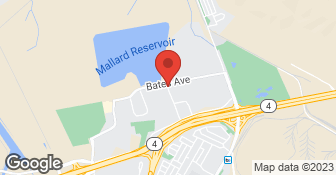 AcuStruct is a General Contractor specializing in foundation repairs, structural retaining walls, landslide repairs, piers, pipe piles, helical anchors, seismic retrofits and all other types of structural concrete and soil repair work. We own and operate all our own equipment. No subs. AcuStruct is Diamond Certified and an outstanding member of the better business bureau. We have been in business for 12+ years with over $20M in completed projects....

Description of Work
Company built a retaining wall that looks as if it will resist an earthquake in the nearby fault. |Not cheap of course but very well built and reinforced.

My experience with AcuStruct and owner Dan Yust was absolutely excellent in all respects. Dan is a consummate professional who cares most of all about giving his clients exactly what they need and doing the job exactly right from day 1 until completion. Before going to contract with AcuStruct, I had engaged a civil/soils/structural engineer for problem diagnosis and solution planning. At the planning/bidding stage, using the engineer?s specifications for scoping and planning, Dan was very clear, both verbally and in writing, about exactly what he was proposing to do, how he was going to do it, the estimated time for getting it done, and the cost for doing it. Dan worked very closely and cooperatively with the engineer at all times during the project. Once I had accepted Dan?s bid, he was more than reasonable during contract review and ?negotiations?. I put that word in quotes, because Dan basically accepted all of my suggested/requested contract modifications and new provisions. Dan was also totally honest about project scheduling, making it very clear to me that finishing his current clients? in-process projects had to have priority over beginning my job. Which, of course, is exactly as it should be; Dan then gave my project the same protection and priority once he had begun. AcuStruct owns all of their own heavy equipment ? vehicles (a LOT of vehicles!!), compressors, soil drills, concrete pumping equipment, leveling and pressure regulating equipment, etc. etc. The AcuStruct crew conducted the project under the able supervision and management of Project Manager Rafael and day-to-day onsite supervisor David. Both of these individuals were highly professional, knowledgeable, and customer-service-oriented. Dan?s workers are ALL employees of AcuStruct ? he engages no casual day-to-day labor. During my project, two ancillary add-on projects were undertaken for which I believe Dan engaged the appropriate sub-contractors ? one having to do with repairing a pre-existing (and previously unknown to me) problem in my HVAC system which came to light as Dan?s crew were completing their excavation and demo phase, and one plumbing task which I had asked Dan to undertake as part of his job. Dan took full responsibility for engaging and managing these subs and for the quality of their labor and the materials they supplied. During the project, the need for 2 or 3 expanded scope change order items became apparent. These were things which could not have been observed nor foreseen before the job began. Dan?s approach/pricing/timing for these change orders were MORE THAN FAIR!!! Quite a different approach than many contractors. Every day of the project, the AcuStruct crew took great pains to minimize inconvenience to me and to my neighbors. In fact, a number of my neighbors went out of their way to tell me how much they appreciated this and how impressed they were by it. The crew showed up every day on time, and often worked overtime and on weekends in order to keep the job progressing. The crew left the job site orderly and clean at the end of every day, with appropriate warning signs/tape and temporary barriers left in place to prevent any accidents. The results of the project were absolutely first-rate in all respects. The ?symptoms? of the problem for which I had first engaged the engineer and Dan? buckling of hardwood floors and badly out-of-level living quarters ? were all completely alleviated. All of my crumbling and failing foundation components were replaced/re-poured. Surrounding external soil and concrete pathways were properly replaced, tamped, and/or graded. All unavoidable damages to my home caused by the project (removed siding, external paint blemishes, doors and windows going out-of-plumb, etc.) were meticulously repaired by Dan?s crew, and the crew left the property cleaner and more orderly than it was before they had arrived. In summary, AcuStruct performed very much above-and-beyond expectations in all respects on this very difficult and complex project, and I would unreservedly recommend them to anyone who has a need for these types of critical foundation improvements. I will be posting a version of this review on other appropriate websites.

Everything was okay but we had a misunderstanding. I don't think that they explained us and they brought in more concrete than we needed. They did an estimate but we had extra stuff. They brought it for us and we had to pay for it, and we couldn't use it. We did the measurement but for some reason they brought in more. They left it in our backyard and we don't even need it but that is okay. It is no big deal. The service was good. I wasn't there, and it was my husband and my brother who were there, but they didn't complain about anything other than that they had way more stuff. I think that was the best price we could get, but I don't know. The quality was good but not the best. They are good.

Description of Work
We used them for some concrete work.

Excellent work. Took longer than expected but there was no compromise on quality

When we bought our house in August 2012, we knew we would need major foundation work done. My husband, a civil engineer, interviewed and got quotes from three local companies. AcuStruct came in lowest by a significant amount, and it was clear they were the most professional, doing the most detailed evaluation before giving us a quote. As a stay-at-home mom, I saw firsthand what work was done every day. The men showed up on time, worked extremely hard (were not on cellphones), never left before five, had a quick lunch, worked a couple of Saturdays to stay on schedule, and left the area as clean as they could. As they bored holes into the ground with a massive drill, they tried to keep damage to the exterior walls and hardwood floors to a minimum. The crew was conscious of my young children and kept the area as safe as possible. The whole team worked smart. Every day they would explain to me what the day’s work would be. They were never condescending and explained their work in thorough and specific detail. They protected the house and tools from animals and rain. They were careful with our home and had the foresight to plan ahead so there was no extra effort to the work. Daniel, who worked on the job from start to finish was excellent at explaining the “what” and “why” of the job. He was courteous, easy to talk to and took my concerns seriously. He worked with me if there was a problem and took my concerns to his supervisor if needed. Dennis, the foreman of our job, was fantastic. He ran the job like a well-oiled machine. He was in complete control of his crew, there were never any delays, he took me around the house every day to explain what was happening, he tried to keep noise and dust to a minimum, he worked with me to keep us comfortable in the house when it was cold, he tried to keep damage to the house to a minimum by discussing options, and after the house was leveled, he personally went around and readjusted doors. He even offered to help me put up smoke detectors before the county inspector arrived. Dennis had a good balance between being personable and professional. The job finished on schedule and we paid the price that was quoted even though an extra reinforcement was added under the house for a particularly low spot. They even did little things as the job finished up like replant plants, saved some of the best dirt I requested for the kids, power sprayed the house, and basically left the exterior looking better than when they’d started the job. AcuStruct has spoiled us for other contractors. After having wonderful work done by them, I’ve had three other contractors work on the house. The other companies have treated me like I can’t understand the work, have been uncommunicative, I’ve had to call them back to redo work, and I’ve seen the crews sitting around. I had one contractor not want to redo crooked work, one company left me in the dark as to what they were doing and I had to rely on the county inspector for information on the job. If I had to do it again, I’d hire AcuStruct in a second! Thanks, Anna

So far, they are doing an excellent job. They had the best quote and of the several companies we spoke with they were our favorite. The work is still in progress, but so far we are very pleased.

Description of Work
They are putting in 22 piers and raising my home 4 inches.

They were timely, they took care of business, and they just did a good job. I was here most of the time and I know some things about construction; they didn’t nickel and dime me. They were pretty cooperative and I highly recommend them. They did a top-notch job and took care of us.

Description of Work
Acustruct jacked the house up about three inches and repaired the foundation.