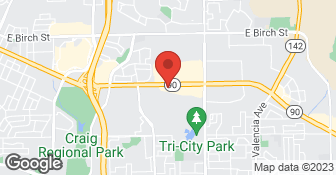 Full service exterior property maintenance company. Residential and Commercial cleaning. We can wash the roof, gutters, siding, windows, chandeliers blinds, concrete, decks, awnings, and even signage. Our company even offers sealing and protecting services for many items such as concrete and stone, glass, metal and roof tops. We are a family owned business with approximately 10 employees. We do not use subcontractors and all of our employees are fully insured....

We offer custom window cleaning for residential homes where we treat your home like our own. We clean your windows on the insides and outsides detailing them to make them look new. While working we wear booties to make sure that your carpet and floors stay clean while we do our job. Satisfaction is guaranteed. Free estimates Call today ! 323 632-7207

Window cleaning, pressure washing and gutter cleaning. We can also have limited experience in Video and Audio for zoom online broadcasting. We have assisted in wedding and even portraiture with professional equipment. Hi In these rough times, I am dedicated to resolve your cleaning needs, by stricter standards that apply to track cleaning, power washing, and doing the windows inside and out. Taking the best procedures in cleaning glass we also do sanitation or deep cleaning for a extra bit of labor that it does entail at affordable fees. Sincerely yours Zip window cleaning and Bluewhite video productions a new venture start up.

Jetstream Power Wash is a full service exterior cleaning pressure washing company operating out of Corona, CA. We are the leading provider of exterior cleaning services for all residential, commercial and industrial properties throughout the Inland Empire, Orange County and the surrounding areas. We are a step above the rest in the mobile hot-water pressure washing industry with state of the art equipment that provides professional results every time. We can provide one time, bi-weekly and monthly services to keep your property looking it's best. Jetstream is a locally owned and operated, fully licensed & insured family business.

The results were very good, especially with two windows that were very hard to access due to a porch awning.

We set up with KC's owner to have them come out every four months to wash our windows and they did in 2012, 2013, 1014, 2015, and twice in 2016. Then they just stopped coming. No call, no email. I called a couple times only to get someone else who supposedly took a message. Once we did get a time scheduled in 2017 right before Xmas party, but the technician didn't come. When I called about it, I a...

First hired on 10/12/12. Set up as a quarterly service with Kris. Went pretty well through 2013 and 2014. Then appointments were missed. I only have down that they actually came once in 2015. When I would call, there were a variety of excuses. They showed up twice in 2016. Haven't seen them since 7/12/16. Their work was gernerally good, but occasionally, the technician did not check his work, leav...

Thanks [Member Name Removed] for the feedback. Sorry it doesn't compute for you but the costs are just not fathomable for a 2 man crew to fight traffic to your area for a small $200 job that is rather challenging. Most of your visits are accompanied by small (however legitimate) complaints about your screens (which requires unpaid return trips) so when it's all said and done it's a difficult but n...
5.0

The two man team completed the work in 4 hours. They did an outstanding job. My only concern was that I thought the price was somewhat high for the amount of cleaning performed. Hence my "B" rating for Price.

DESCRIPTION OF WORK
Power washed vinyl siding on my 1 1/2 story house, covered patio and the front of my gutters. Cleaned windows (inside/outside) and screens.

Good. But he never followed up w me or returned my calls. Guess he didn't want the job. His response is slow or nothing at all. :(