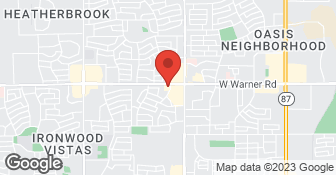 Since 1989, we have been dedicated to providing pets throughout the Valley with comprehensive healthcare services including 24/7 emergency, specialty, and wellness care....

The first thing I did when getting there was ask if they could see my cat right away. He had a very swollen leg and paw. I was concerned about poison from a scorpion or spider. I said that if not I would drive over to another vet in Gilbert that was open. They yes, they could see him immediately. They then put us in a room and we sat for 40 minutes before I went back to the front desk to ask if they could give me an ETA. I said I can just go to my normal vet in an hour. They then started spouting excuses why the vet had not even been in to do a triage. When my wife started to explain that we would not have even come in if they had been honest about not being able to see him immediately the employee said "What is your problem lady?" among other less than professional comments. I was floored. We then called other vets, found an opening and left. We will NEVER go back. They were compassionless and lied to get us in the door.

This is the worst place to take your pet. When we got there, the woman asked us what we wanted to do with our cat after he died. One of the options was to do nothing, in which case our cat would be cremated. I asked about what happens then, and she didn't have an answer for that. So, I said he would then be thrown out at which point the woman became unprofessional, constantly talking about how they don't throw away pets. Sure, if we don't take him with, and you cremate him... what exactly do you think happens. The vet came in to euthanize our cat and said maybe 2 words before running out. How comforting. We chose to get our cat's urn, and were told it would be ready to pick up in 3-5 days. 5 days later, my husband called and he was told he wasn't there yet. No further explanation. So I called. I was told by one person we should have been told 1 week, which means maybe you should train people in what expectation to give to your grieving pet parents. Then, I was transferred to someone who said they were a receptionist. I wouldn't hire this woman to be anything but satan's receptionist. She told me if my cat had just died earlier, we would already have had him back. I couldn't believe this "woman" said that. I told her I wanted to speak to a manager, only to be told managers don't work on Friday afternoons. Must be nice to have no supervision. I asked for a call back, never happened. I called today, 10 days later, and all I get is a non-sympathetic sorry about the above situation. Oh, and a that shouldn't happen. No ****. I got nothing about how they will talk to the person, nothing about how they will re-train them, nothing about how that person shouldn't work with the public (not that I can tell them to fire her, but they should). Oh, and the icing on the cake, my cat's urn says he was cremated a month before he died. Don't take your pet here. They have no clue what they are doing.

Description of Work
My cat was dying, and his normal vet wasn't open.

The veterinarians there are absolutely phenomenal. They actually saved the little cat's life, that's how we got her. She was just outside our door dying and we took her to their clinic which is attached to a 24X7 pet hospital. They took care of her, they gave her an IV and kept her there for a couple of days. It took her about 2 months to recover. They're just really very sensitive and very nice group of people there.

Description of Work
We use 1st Pet Veterinary Centers for veterinary care. I took my pet there probably about a month ago. They gave her a check up, prescribed some antibiotics and gave her shot.

We have been taking our cats to First Regional since February 2004 when we needed emergency services for a very sick cat. They did such an outstanding job that we decided to use them as our regular vet. Everyone there is just wonderful and we have had nothing but great experiences. We had four older cats, and First Regional saw all of them through thick and thin. One had a stroke and was partially blinded; they gave us great advice on how to make him as comfortable as possible. They helped us with the others, all three of them making it through very old age. One of us is an ex vet-tech; they took the time with him to feel very comfortable that he could correctly administer the daily fluids and medications that they needed. Dr. Babyak is such a caring person and is just so knowledgeable about internal medicine; we would not have been able to enjoy our cats as long as we did without her help. And when it came time to say goodbye to them, the entire staff was so comforting. I am ever appreciative for Mary and the tech staff making this bad situation at least tolerable. And, I will admit, Mary even shed a tear with me. When we finally adopted a new rescue cat, of course we took her to First Regional. Our new vet, Dr. Flood, correctly diagnosed what we thought was a behavioral problem. The cat was spraying on a curtain. What we thought was bad behavior was actually a urinary tract infection. Once the infection was cleared up, on the follow-up visit, Dr. Flood found crystals in her urine and recommended a food change. Now our cat is healthy, and she and we are as happy as can be. I would never go anywhere else. All of the vets and all of the techs are very expert, very friendly and very caring.

Description of Work
Follow-up visit for our cat who had a urinary tract infection and crystals in the urine. The visit included lab work for the urinalysis.

I say this from my heart. They are hands-down the absolute best choice in veterinary care......without question!

Description of Work
I have been a client at First Regional Animal Hospital for 13 years and counting and have received nothing but the most stellar care from well-informed doctors and technicians. First Regional is top-notch when it comes to both regular day-to-day care and emergency care. I have also grown to adore the front office staff who has "seen it all" and can handle any situation, including the most difficult, to which I was most grateful. I first sought out First Regional when I moved to AZ in 2000, mainly for well-exams for my two cats. We saw Dr. Joyner for years who is always up to date on the latest treatments and I have been especially impressed with his knowledge of more homeopathic remedies. Dr. Joyner takes a "less-is-more" approach except when he is certain that additional tests are needed or has information that leads him to believe that more tests/treatments are necessary. That brings our journey to internal medicine, where I believe I have seen the number one specialist in veterinary medicine. Dr. Babyak is "second to no one" in her knowledge in treating complex diseases and her bedside manner with both my "babies" and this baby (me!) is amazing. It was so nice to know that an expert in complex treatment was right there and that Dr. Joyner could consult with her and pass me over to her when the time was right. I must say I have had some pretty stressful times as my two cats aged and were terminally ill. It's scary and sad and I wanted to make certain that I did the right thing but not put them through too much for too long for my own benefit. Dr. Babyak and Dr. Joyner both were caring advisers, assuring that I understood exactly what was necessary or maybe when it was becoming too much but still leaving the decision to say goodbye with me. The techs......AMAZING! I have met so many as the visits became frequent at the end. Elana, Dr. Babyak's lead tech is unbelievably good at what she does and is so knowledgeable. She has worked with Dr. Babyak for so long she is almost like an extended limb which is so comforting. Dr. Joyner's techs are equally good and have also been with First Regional for as long as I can remember. Ultimately I ended up putting both of my babies down in late '08 at the age of 14. Dr. Babyak was right there with me and the staff was so gracious knowing how incredibly hard that was for me (I was a basket case). They sent me a card after the passing of each of my boys and all signed it with a note to me that I still have on my desk today. They also sent along two little cards that they put together for me with their paw prints.....so special. Recently (2010) I adopted two elderly cats from Friends For Life with the purpose of giving two older and less adoptable cats the "best rest of their life possible". They ultimately have both developed illnesses....diabetes and a pretty major lymphatic gastritis. Dr. Joyner continues to treat my diabetic cat and Dr. Babyak is now treating the other. What I do know is that I could not provide them the "best rest of their life" with any other vet than First Regional. I say this from my heart. They are hands-down the absolute best choice in veterinary care......without question!

I would refer them to anybody. They provide excellent care.

Description of Work
I take my pet to this animal hospital.

They did what they were supposed to, not very well or sensitively.

Description of Work
Brought in a feral neighborhood cat who'd been shot and was paralyzed. I told them I only wanted him euthanized, but they whisked him away, put in an IV, charged me for an exam, the kill shot and disposal of the body. I told them they were highway robbers on the way out the door. Thanks also to the clerk who kept interrupting my last moments with the cat by waving a bill in my face, nice touch.

The veterinarian that I saw was very professional and thorough in the exam. This was my first visit with a newly adopted rescue dog and he spent time discussing all aspects of care for the dog. I felt that I had time to ask questions and obtain his advice. He even checked the ID chip that had been previously implanted in my dog to make sure that it was registered correctly. I was very pleased with the service.

Description of Work
Exam and vaccinations for my dog.

The techs are great at this hospital. They see you before the vet does and take history and check signs. We got Dr. Flood as our vet and she is attentive, interested, caring and knowledgeable. She diagnosed an ear infection and started my dog on antibiotics even before the culture came back. The infection cleared up by the time we went for a follow-up visit. The only thing I didn't like it that they take the dogs out of the examining room to treat them. I prefer being with my dog while her ears are cleaned, nails are cut, etc.