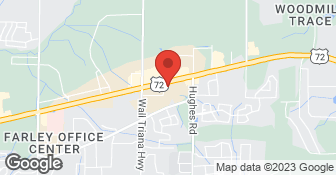 On behalf of the Clem family we would like to thank you in advance for considering us for your automotive needs. Since 1932, we have stood by the principles set forth by four generations of family to deliver fast, friendly service with integrity. Our name is on our buildings - along with our reputation....

My SUV has an uncommon size. When one of the tires went flat and they were already getting to be in need of replacement I bought them at Clem’s in Madison which is where I usually get my oil changed. It was a Saturday and Clem’s told me that it would probably be Monday before they could get the tires They unexpectedly called me back later that day and my SUV was ready. Not only that they applied a discount coupon and filled out my rebate. I was very impressed!

Description of Work
Had to unexpectedly buy new tires

Vehicle was taken to Clem on several occasions for different services. On this last occasion, we brought our minivan in for its 80,000 mile maintenance check in preparation for a trip to florida. During the maintenance the tires were rotated and balanced. I also asked them to reset the TPMS (tire pressure monitoring sensors) since they were not working. Upon picking up the vehicle, I noticed a pronounced vibration while driving, so I brought it back to Clem. They checked it out and couldn't find anything wrong. I drove with the mechanic and pointed out the vibration. He stated that it was probably due to wear on the tires being more noticeable since they were rotated. I asked, "If this was your family you were bringing on a long trip, would you feel safe driving them in this vehicle?". He said "Yes, I would". We left the next day for Florida. Upon arriving to our Condo. My wife headed out to the grocery store, and called me to say the van felt like it was about to shake apart. She returned to the condo immediately, and I drove it. The shaking was very severe. I got out and in looking at the wheels, I noticed that one of the wheel lugs (bolt and nut) was missing. Upon further inspection I found that every lug nut on the vehicle was very loose. Each lug nut was within a couple of turns from coming off. I tightened all lug nuts an immediately brought the vehicle to a service station to have it checked out, and to have the broken lug replaced. While I was waiting, I called Clem to let them know what happened. I was immediately met with an attitude from the person at the front desk telling me that it was impossible for all of the lug nuts to be loose like that. He refused to take any responsibility, and then suggested that I was lying about the entire incident. He told me that either I lossened the lug nuts myself, or someone else did it while we were not watching the vehicle. the vehicle was parked in our garage over night prior to our trip, and was never unattended during our travel to florida. I requested that they reimburse me for the cost of fixing the lug, and he refused. I called back and talked to one of the owners of Clems, who also claimed no responsibility in the matter either. He did inform me that they have a policy of NOT using a torque wrench on lug nuts to ensure they are properly torqued. Stating that it was a waste of time. After a long conversation about responsibility and the dangerous situation they placed my family in by not ensuring the lug nuts were properly torqued, the owner agreed to pay for the replacement lug, which was approximately $75. But insisted that Clems was in no way admitting responsibility for the issue. When I originally requested the mechanic reset the TPMS system. He informed me that they would have to "trick" the ECU into relearning the TPMS settings. Which may or may not have led to future issues detailed here: While having the vehicle inspected in florida, the check engine light (CEL) came on. It indicated that one of the O2 sensors was bad. We had that replaced by the mechanic and went on our way. On our way back from florida, the CEL came back on. We had the codes read, and it was now indicating a fault in the cam position sensor. Resetting the code cleared the problem, and the vehicle was fine until the next day, when the same fault came up again. We had the cam position sensor replaced. Again, the same CEL came up again several times... each time the vehicle would stall out. The CEL was reset. We brought the vehicle to our local nissan dealership, who could find no problems with the vehicle. Prior to the maintenance provided by Clem, this vehicle had never given us issues. No CEL codes, no vibrations, nothing. I cannot prove that the CEL codes were a fault of Clems' mechanic "fooling" the system in his attempt to reset the TPMS, but the chain of events that occurred after sure do point to the suspicion. The unprofessional attitude that I received from Clems was astounding. I would not refer anyone to them.

Description of Work
80,000 mile maintenance on our vehicle

It always goes very well. On time and for a good price. I never have to worry whether or not the repair is really needed. If they say it is neeed, it is needed.

Description of Work
They always do the repairs to all three of my vehicles when needed. Love them. Very knowledgeable and the price is right.

Description of Work
Got new tires and alignment

They were kind, respectful, and the price was less than I thought it would be. This is the second time I have used this company for tires and I will go back!

Description of Work
I needed 2 new tires and they had them in stock. They were able to put them on the next day when I got off work. I didn't make an exact appointment. They had the work completed within 45 minutes or so and even removed a nail and repaired one of my good tires for free.

Description of Work
Install starter on a truck.Diagnostic.

They were rude. I wanted to ask a question and he just acted like I wasn't there. He was talking to somebody else just shooting the breeze. After 5 minutes or so, I said excuse me. He was rude and I won't go back. I didn't have any work done.

Description of Work
I went to Clem Tire to have some work done.

Their prices are fair, their service is excelent, and their attention to detail is exceptional. I usually do most of my own mechancial work except when it's beyond my capacity or tools. I will only take my vehicles to CLEM'S Auto.

Description of Work
The first time I used their services I had taken my car to one of the national "brake" service centers for a front end allignment. The car was pulling hard to the right. The "Brake" service center said they performed the service and charged me $60.00. When I drove the car home it was still pulling to the right. The next day I took it to CLEM's auto service where their technician spent over 2 hours trying to fix the issue. Using their computerized allignment system they determined the front right "A" frame was bent and suggested a shop to take it too and provided me with the computer printout. THEY DID NOT CHARGE ME A DIME. The next time I took another vehicle to have the air conditioner condenser replaced. I had purchased the part at a local auto parts chain and took it to them. During the installation they called and informed me the part I supplied would not fit correctly. As it turns out even the parts supplier they use only had the same replacement part. I could have gone to the FORD dealer and purchased a original replacement part at twice the price or Clem's would do their best to fit this other condenser replacement. THEY DID A GREAT JOB. I was very please with both the service, attention to detail and the price..

They gave me a good estimate, performed the work when they said they would and did not try to add on additional services like some shops do. I have used this shop in the past and have always been dealt with honestly and straightforwardly. They do good work and are significantly below the sky-high dealership rates.

Owned and operated by Jason Ezell, Madison Automotive of Madison, AL caters to all your auto repair needs. Whether foreign or domestic, if you drive it, we can fix it for you.  …

We can fix almost anything on your vehicle except body repairs and internal transmission problems.

Clem Tire Co is currently rated 4 overall out of 5.

No, Clem Tire Co does not offer free project estimates.

No, Clem Tire Co does not offer a senior discount.

Are there any services Clem Tire Co does not offer?

We can fix almost anything on your vehicle except body repairs and internal transmission problems.