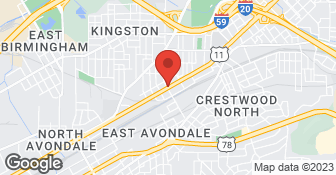 Switzerland Air is an Alabama Power Certified Contractor. We service all brands of equipment. We specialize in Single and Multistage Heating and Cooling systems. We service and install Multizone, Hybrid and Gas/Electric systems....

They came that day and picked it but something else was still wrong that made it go out after they left. They came back and installed new parts and fixed it. We have had a service contract with them since 2004. Wanda calls me twice a year to set up my spring and fall service. If I have a problem ever they are quick to come. I highly recommend them. I wouldn’t use anyone else.

Description of Work
Our heat pump/AC went out.

This company is great. I've done business with them for over 10 years during which they replaced 3 old units for me. Their prices are very competitive, installation is prompt and efficient, and warranty coverage is stellar. The personnel are all courteous and efficient treating your home as you would treat it. To them, you are family not just a pay check.

We've had real good luck with them. I would use them in the future.

Description of Work
We've had Switzerland Air. They did our spring service two months ago.

It was okay. I personally didn't care for the person that they sent out.

Description of Work
They cleaned the units and replaced a part.

Bottom Line Up Front: I won't use them again, nor will I refer anyone to them. Reasons: The only people that had ever done work on my old unit (since I moved into my house) was Switzerland Air. Prior to buying the house (in March of 2011) I had one of their techs come out and check the A/C and Heater (and all associated equipment) just to make sure everything was in good working order. The technician told me that the A/C unit, even though is was undersized for the house, should last another ten years. All the pressures were good, and the freon level was fine. I was very impressed with the tech and I agreed to have them come out every six months to service the systems (A/C and Heater). The first year was fine. The next summer (Summer of 2012) a different tech came out and all of a sudden my unit is low on freon, and since it is an older unit (original to the house (at that point about 10 years old)) they are not allowed to put more freon in the system. That's when they sold us the new $7,300.00 A/C system. No issue with that...but was curious about the and quot;should last another 10 yearsand quot; comment the original tech made. The installation of the new A/C went fine until I asked the installers to install a new thermostat (that I had purchased specifically for the new A/C). They said it wasn't compatible with the new A/C (which turned out later to be inaccurate). Then they started trying to nickle and dime me. Every time they came out they found something else that wasn't covered under the A/C warranty. Finally, I called another A/C company and had them come and look...they couldn't find anything wrong. I specifically asked them to check what Switzerland said was wrong (while I was standing there) and the new company's tech told me that everything was as it should have been. So, I started thinking about all the interactions I had with Switzerland and am now suspecting that I may not have needed to buy sold a brand new ($7,300.00) A/C Unit. I think regardless of whatever the truth is, that company lost my trust over a $200.00 part. I won't have them back ever again.

Description of Work
The provider came to check the A/C unit I purchased from them the year before, they offer a couple free services as a benefit of buying a new A/C or heater.

My 83-year-old mothers air conditioning went out about 9 o'clock tonight. Based on a reference from a neighbor I called Switzerland Air. To my surprise they came out that night and stayed until about 11 PM. Scott the technician was very courteous and professional and very concerned about my mom's health as we live in Alabama and it gets very hot here. He was able to patch up the unit That got us through the weekend but it did require a new unit. They came the following Monday and very quickly installed a new unit and had it up and running with no problems. The installation guys were incredibly courteous and cleaned up after themselves. I felt comfortable with them there with just my mom and am very appreciative of how they treated her. I found the prices to be reasonable and in-line with the competition. I also engaged them in a yearly service contract at my primary residence and Scott came very quickly and got me serviced and I feel very comfortable in working with these guys on an ongoing basis. Wanda is the person who answers the phone and called me several times to check up on the status of the service. I really appreciated that level of service.

Description of Work
We use Switzerland Air Conditioning and Heating for yearly maintenance services on our heating and air conditioning unit. They come twice a year, in the summer and in the winter.

Description of Work
I contacted Switzerland Air Conditioning & Heating to come out and look at my heatervac. The gentleman came and told me that my furnace was leaking and he disabled the furnace and said that I needed a whole new unit.

The service technician came as scheduled and did a thorough job, explaining things to me as he went along, and answering my questions. At the end of the service call, I decided to buy a service contract with the company.

Description of Work
I had my three air conditioning units serviced.

Everyone was prompt, courteous and very professional. I am very favorably impressed with them so far.

Description of Work
SACH performed basic checkup service for my home. They fixed a faulty condensation drain pump and put in platforms for the outdoor units.

The work went very well. We have a preventative maintenance contract with Switzerland and they discovered the problems with our old unit during a normal visit. They showed us how they estimated the proper capacity of the unit and recommended a heat pump as part of a "hybrid" unit continuing to use our gas furnace in addition to the heat pump to heat the house. Above 35 to 40 deg F the heat pump would provide more economical heat than the furnace and below that temp, the furnace would be the best choice. My research confirmed the accuracy and logic of their proposal. We worked the details and scheduling with Tony and Chris did the installation. We had all questions answered before contracting the work and Chris showed up on time and did the entire work in about 6 or 7 hours.

Description of Work
Replaced our old air conditioner with a heat pump, including new coil, thermostat and pad.

Switzerland Air Conditioning and Heating has some of the most professional and respectful people I have ever used. I have been using them for a long time because they treat me so well. Someone always calls me a couple days in advance to let me know they are coming out, and they always show up on time. When they come to my home I know they will get the job done right the first time. I love Switzerland Air Conditioning and Heating.

Description of Work
Switzerland Air Conditioning & Heating comes out twice a year to inspect my air conditioner and my heater unit.

Wilbur’s Air Conditioning, Heating & Plumbing has been serving homeowners and businesses in the Birmingham area since 1979. We are Family owned and operated and have earned a reputation for quality service. We stand by our work, and are proud of our long-standing commitment to 100% customer satisfaction. We strive to provide you with 5 star service 24 hours a day, 7 days a week, 365 days a year.  …

Ethridge Heating and Air is a local, family-owned and operated company. We have been serving Birmingham and surrounding areas since 2002, when Jamie Ethridge established the company. Jamie personally has over 25 years in the HVAC industry. After working in the industry for several years, Jamie decided to create a company that is focused on personalized service where personal comfort and quality work is of the utmost importance. Throughout that time Ethridge Heating and Air has kept pace by continually working to offer our customers the most effective, energy efficient HVAC, Birmingham, AL has to offer. At Ethridge Heating and Air, we pride ourselves on our excellent customer service, quality, and professional employees. All of our employees are experienced, licensed, and insured. We perform extensive background checks and drug screenings to ensure you work with the best in the industry. We offer financing for new installations.  …

Switzerland Air Conditioning & Heating is currently rated 4.3 overall out of 5.

No, Switzerland Air Conditioning & Heating does not offer eco-friendly accreditations.