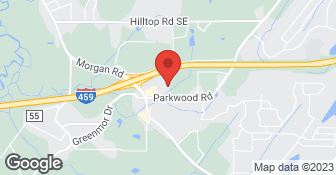 Ethridge Heating and Air is a local, family-owned and operated company. We have been serving Birmingham and surrounding areas since 2002, when Jamie Ethridge established the company. Jamie personally has over 25 years in the HVAC industry. After working in the industry for several years, Jamie decided to create a company that is focused on personalized service where personal comfort and quality work is of the utmost importance. Throughout that time Ethridge Heating and Air has kept pace by continually working to offer our customers the most effective, energy efficient HVAC, Birmingham, AL has to offer. At Ethridge Heating and Air, we pride ourselves on our excellent customer service, quality, and professional employees. All of our employees are experienced, licensed, and insured. We perform extensive background checks and drug screenings to ensure you work with the best in the industry. We offer financing for new installations....

They called to say Andrew was on his way. He arrived soon after that. He immediately got to work and told me what the problem was and explained what would be done. He let me know about my HVAC overall health and explained the upcoming 2020 EPA changes to freon used by my unit. I will not hesitate to call on Ethridge again. I'm very happy with their work.

They never contacted me after I left a detailed message telling them what I wanted done.

Thanks for the feedback. We have record of your request for maintenance on your AC unit. We also have record of our response to you quickly after your request. We don't see the customer side of Angie's list so I'm not sure why you didn't see our response. If you would like to continue the conversation or are still in need of maintenance, please call our office or respond here. If you do respond here, please monitor your account for our response.
5.0

Got financed all was set to go. The day they were to start they didn't show up. Called and they said they couldn't do the job. Left me high and dry. Would never call them again

Hi Mr. [Member Name Removed]. We are sorry this happened. The details of what happened are not clear as this was almost two years ago. We specialize in fixing your A/C fast. If one needs replaced, we can do that fast too. Looking back at the job details, this was a 5-8 day construction project, which we don’t even do in the busy season as it would prevent us from being able to do what we specialize in, fast service and repairs for customers. This should have been communicated to you up front, before you wasted your time arranging it with us. We are in the practice of making this clear out of respect for your time. We are so sorry this happened. Being a couple of years ago, on a job we didn’t do, it’s unclear what happened but we will be sure to make sure to communicate better! Thanks Thor your feedback!
5.0

Very pleased...I was called in advance of my service window to advise the tech was on his way. He arrived within 10 minutes and I showed him the thermostat and the unit to be serviced. He went right to work and checked the unit in the crawl space. Then he checked the condenser to ensure there were no cooling leaks and cleaned the unit. The tech was very polite and extremely professional. I had used Ethridge last year when I had an issue and was pleased, That is why I chose them again. Daniel did a great job!

I have been using Ethridge for at least 12 years. We have a maintenance contract with them so I see their technicians at least twice a year and it has been the same knowledgeable guys every time. When Daniel said last Friday that my heat pump was going out I knew they were the only ones I would trust to do the job so I did not think about trying to get a cheaper price elsewhere. My confidence in them increased when the same lead installer arrived at my house to do the job who had been at my house probably 5 years ago to install a thermastat. Daniel had forwarned Billie my job was not going to be easy because the old heat pump to be replaced was in the attic. Billie came in with the most positive attitude and he had remembered being at my house. They stayed late to finish the job up. When they left he and his team left everything clean. I could not have ask for a more competent crew to do this job. I highly recommend this company.

Thank you so much [Member Name Removed]! That really means a lot to us! We’re glad you had a pleasant experience. Thank you for being such a great and long time customer!
5.0

Fantastic. Submitted a request via AL Sunday morning expecting to be called back Monday. Got call about 3pm asking if I still needed service that day. Inquired if there was an extra service charge for Sunday and told no and the fee would be waived if they made the repair. Technician (Daniel) was there within an hour, diagnosed the problem and had it corrected inside of an hour. Fantastic service. Will use again. Highly recommend.

Description of Work
Heating unit went out the Sunday after Thanksgiving

Work was done promptly and efficiently

Ethridge did a excellent job at a competitive price. Would recommend.

Spoke with Mr. Ethridge first thing Monday. He was able to send a tech out between 10-12. Andrew arrived on the early side of my window and was able to diagnose the source of the problem within the first five minutes. Fortunately for us, it was an inexpensive fix as he found a wire had come off the condensation pump. He properly reattached the wire and the condensation motor started as soon as the breaker reset itself. Another less reputable company could have told me I needed a new unit. Ethridge and Andrew just became my AC contractor!

Prompt and professional service and technician. Price was reasonable.

went well, very professional and according to time lines

Daniel with Ethridge is extremely friendly and professional. Would definitely recommend.

Well, both units need some new parts, as expected.

Description of Work
This was inspection & tune up of 2 gas furnaces.

Work was completed successfully and on time. The technician showed up early, and actually called ahead to ask if you could be here early. Very professional.

They were very professional and did exactly what they said they would do and in a timely manner. Haven't really had a chance to use the system yet but so far my husband and I are well pleased.

Description of Work
Just had Etheridge put in a Furnace and AC unit.

Technician was prompt and thorough.

Jeff, the technician, arrived on time and checked the unit. He cleaned the drain line from the unit and dried out the drain pan and inside of unit. He checked the A-coil, found it needed cleaning, and took pictures with his phone to show me the condition. He gave options for different levels of service and provided prices for each so I could decide which to choose. He cleaned the coil and took more pictures to show me the difference. He also added brackets to hold the air filter in place securely. Jeff was thorough, patient, and answered all my questions. After the service, there was a definite improvement in air flow inside the house. I will call them again.

Description of Work
Air conditioner was leaking water into the basement.

Description of Work
They installed a new cooling unit.

Thank you for the feedback. We are unaware of any services performed for a customer by this name. We are located in the Birmingham, AL area. This address is in TN. Perhaps this review was meant for another service provider? If we are missing a vital piece if information linking your review to a service we did perform somehow for you in Alabama, please make us aware of the issue and I assure you we will make any corrections to beyond your expectations. Also, we see where you gave us a separate review with an "A". We appreciate that but still, we have no record of performing any service for you in Tennessee as we are in the Birmingham, AL area. I would love to clear up any issues there may be. If this was in error, please correct at your convenience. Thank you!
5.0

ok. wonder if I was ripped off. Is black inside furnace (he cut a square out) mean mold? Will blue light cure it?

Was very impressed with the whole process. Daniel was a great technician, very professional, knowledgeable and polite. Can't say enough good about Daniel and Ethridge as a whole. I'll be a customer for life.

Description of Work
Called Ethridge on a Tuesday afternoon, the came out early Wednesday afternoon. Promised a 1-3pm window, they called before coming and arrived a little before 1pm. Found the problem, fixed it quickly and cleaned up after. The a/c fan and capacitor needs to be replaced.

Very nice; identified a problem with the a/c and will be looking into getting that fixed through my warranty but was a good experience overall