What Type of Home Do Millennials Want?

Whether it’s an urban townhouse or a single-family home in the suburbs, today’s first-time buyers want a place that’s suited to their lifestyle.

Whether it’s an urban townhouse or a single-family home in the suburbs, today’s first-time buyers want a place that’s suited to their lifestyle.

When you think of a millennial, or Generation Y (those born between 1981 and 1997’ish), you may conjure an image of a hipster living downtown in a super tech-savvy home. And that might be true for some, but for others, a two-story house with a yard and a neighborhood pool may be more on target. Like most things, it depends on where you are in life.

Are You Really Ready to Buy Your First House?

Homeownership is a wild ride. Are you ready for it?

“Millennials want convenience,” says Realtor Jill McTague of DebOnTheWeb & Associates in Medford, Massachusetts. “Close to work, close to shops and restaurants, and close to their children’s school. Location is their No. 1 priority. They typically work longer hours and many times can work from home so they prefer to be in the center of the action. Shorter commutes mean more time with family and friends, and let’s be honest, more time with their devices.”

Townhouses are a popular option

When A.J. Malkiewicz started looking for his first home in downtown Pittsburgh, he knew he wanted a townhome or condominium. “I’m not an acreage kind of guy,” he says. “I prefer a space with minimal upkeep of the exterior, a small space outside for parking, a small garden, or a grill.”

After losing out on a couple of properties because he didn’t make an offer quick enough, Malkiewicz says he considers himself lucky to have found a townhome that checked all the boxes in such a competitive real estate market.

“I live in the heart of the city, which was always my goal,” he says. “Walkability and safety were some of my biggest concerns, whereas things like school district or the square footage of a stand-alone home was much less. I wanted to be centrally located with walkability to grocery stores, restaurants, and shopping.”

A home inspection can offer homeowners — not just homebuyers — expertise and peace of mind.

Realtor Chris Gemlo of Counselor Realty in Minneapolis, says many millennials gravitate toward townhomes or smaller single-family homes that are still near the city’s center.

“Some of that is pet-dependent,” he says. “If someone has a dog, a lot of times they can’t move into a townhome or condo if their HOA prohibits it. Or sometimes they get overwhelmed with the size of a house, and want something smaller. They only need a place to park their bicycles, grow a small garden, and have their friends over to visit.”

McTague says she’s witnessed a drastic rise in the sale of townhomes over the past few years because it offers a less-expensive way for first-time homebuyers to enter the market.

However, as baby boomers retire and downsize, competition for townhouses can be tough.

“The advantage first-time buyers have is their ability to close quickly,” McTague says. “In many cases, the empty nester will have a home to sell before they can purchase the new place, and sellers would rather work with someone who has less contingencies.”

A move to the suburbs

Generation Y is poised to make a significant impact on home design with their preferences for energy efficiency, smart home technology, open kitchens and casual spaces. And while millennials are content to live in the city, lifestyle changes or even familiarity draw many to the suburbs.

Tired of apartment living, Emily Digmann and her husband, Matt, purchased a three-bedroom house in Carmel, Indiana, a suburb of Indianapolis.

“I wanted a yard for our dog, and I wanted a place that was ours and we could do whatever we wanted to it,” Digmann says. “We chose [Carmel] for the safety of the community, great schools for when we decide to have children, and distance to our jobs.”

Gemlo says where his millennial clients end up buying a home depends a lot on their income — they know they’ll get more for the money the further out they move from the city.

“It’s kind of a dichotomy,” he says. “They want to live in the city, but they want something new too, and the suburbs offer bigger homes.”

According to the National Association of Realtors, the median age of a millennial homebuyer is 30 years old.

“Typically, it’s the time in life where one settles down to marry and raise a family,” says Lawrence Yun, chief economist for NAR. “Even if an urban setting is where they’d like to buy their first home, the need for more space at an affordable price is for the most part pushing their search further out." 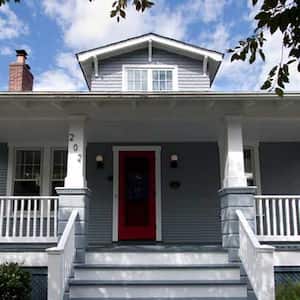 Does a First-Time Buyer Need a Home Warranty?

A home warranty can offer you peace of mind, especially as a novice home buyer.

Despite the gluttony of DIY home improvement shows and YouTube videos detailing how “easy” it is to fix up a house, most millennials searching for their first home want one that’s updated with little-to-no repairs required.

“They don’t want to have to do improvements,” says David J. Caracausa, counselor of real estate with Coldwell Banker Preferred in Bluebell, Pennsylvania. “As compared to the generations before them, they don’t have an interest in sweat equity. They want to see hardwoods, granite, stainless steel appliances, and efficient use of space; every room needs to have a purpose.”

The desire for a modern, clean look is paramount — sometimes to the chagrin of their Realtor.

“One of my millennial buyers purchased a 100-year-old home with all the custom details, such as wainscoting, built-ins and gleaming natural gum wood throughout the entire house,” McTague says. “The wood trim, beams and crown moldings were original to the house and in pristine condition. The very first thing this couple did was to hire a painter to paint all the wood white. They prefer the bright, fresh look of the white.”

What do you want in a house? Tell us your thoughts in the comments section below.