How a Bluetooth Speaker Can Transform Spaces Around Your Home

A Bluetooth speaker makes it easy to bring music into almost any room in your home — and even spaces outside of it.

A Bluetooth speaker may seem like a small luxury or just a gadget for streaming music from a smartphone or tablet. But don’t overlook its core benefit: the freedom to enjoy music anywhere in your home.

“When people find the time to enjoy life, they usually turn to music,” says Jon Anderson of The Sound Vision in Franklin, Michigan, near Detroit.

For many, music is a necessity. It lifts their outlook, eases difficult moments and returns perspective to what matters most.

“They end up only using them sparsely because they don’t have entertainment features in them,” he says.

Adding music to those rooms can reveal possibilities that you didn’t see before.

“It’s about opening up those spaces to more usage, to creating memories,” he continues. “What better way to do that than by having background music on?”

A Bluetooth speaker offers a simple way to do that, letting you take music with you room to room.

Moreover, as Jeremy Wilson of Infinity HD Integration, LLC in Phoenix, Arizona, points out, a wireless speaker can be a practical audio solution for many homeowners.

“It lets them put speakers in places that are too hard or too expensive to put wired speakers,” he says.

Take a look at these examples of using a Bluetooth speaker to expand the ways you use and enjoy rooms in your home.

But with the right music — as well as soothing touches, such as dimmed lights and warmed towels — a bathroom transforms into a place of escape.

“Having a Bluetooth speaker in the bathroom lets people enjoy their Jetta tub instead of hopping right out,” Anderson says.

A waterproof Bluetooth speaker makes it easy — and safe — to bring relaxing music into the bathroom.

Wireless speakers can also maximize your routine. As Wilson points out, they bring the content you want where you want it. Instead of music, a Bluetooth speaker can supply you with world news, stock prices and playoff scores all before breakfast.

For some, cooking is a form of meditation. For others, it feels like an opera, full of highs, lows, builds and climaxes.

And of course, some see cooking as a task to finish quickly before the urge to order pizza grows too strong.

No matter how you like to cook, use music to enrich the experience. Something classical, for example, encourages you to slow down and enjoy the process. Something fun might loosen you up to tackle a new recipe.

Afterward, make clearing the table and loading the dishwasher feel less laborious with upbeat music, such as rinsing to “Twist and Shout” by The Beatles.

Beyond the normal socializing you might do in your living room, a Bluetooth speaker can help you establish and maintain a workout routine. First, music helps transform the room, after you push back the furniture and bring out the equipment.

Second, it prevents distraction. No matter the regimen — flowing through yoga poses, running on a treadmill, lifting dumbbells — music helps you focus.

Drinking margaritas, laying by the pool, inhaling the aroma of barbecue … the warm weather offers lots to enjoy, and a Bluetooth speaker brings a soundtrack to it all.

After the sun goes down, use a speaker to give your patio or deck a lounge feel. Music styles such as jazz and mellow electronic can set the right tone for sipping hot cider, sitting by a fire and looking up at the stars.

Wilson recalls seeing such a transformation happen with a client’s courtyard. “A wireless solution made it possible for them to listen to music out there,” he says. “They utilize that area a lot more. They turned it into an outdoor living space.”

How to choose the best Bluetooth speaker

Bluetooth speaker models vary widely in price and features, which can make it hard to choose.

Some speakers, for example, prioritize a compact design for easy carrying. Some house large speakers, trading some portability for more powerful sound. Some showcase rugged, water-resistant construction for taking everywhere from the gym to campsites.

Here are some features worth considering when shopping:

Multiple forms of connection, both wireless and wired, not only make Bluetooth speakers more versatile, but also enhance their compatibility.

Wilson adds, “I’d find one that connects to Wi-Fi,” noting that can improve range and make networking with other speakers easier.

Look for features that enhance low frequencies, such as passive bass radiators. A strong bass response helps maintain balanced sound, preventing the mid and high ranges from washing out the details.

If you plan to use a Bluetooth speaker around a pool or take it on boat, opt for a waterproof version. If you like to go mountain biking or spend all day at the beach, buy a speaker with rugged housing to absorb shock and seal out dirt.

A speaker remains portable only as long as it has battery power. Some only go a few hours, which is fine for occasional use. For extended playing time, though, prioritize something with eight hours or more of battery life (note that usage estimates typically indicate use at a certain volume.)

Most Bluetooth speakers recharge via USB, eliminating the hassle of swapping out disposable batteries. Some can also output power to mobile devices, double as power banks.

This turns the speaker into a speakerphone so you can transition between music and calls when streaming from a smartphone. 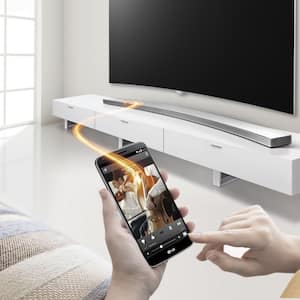 Can a Sound Bar Improve Your HDTV?

A sound bar can make your HDTV's audio clearer and more robust. It won't rival a surround sound system, but it also won't take up as much space.

How do you use your Bluetooth speaker? Tell other readers in the comments section below.