A Guide to Kitchen Taps

Choice of kitchen faucet can modernize your kitchen.

Designers and engineers of kitchen taps are always striving to make their products more user-friendly, stylish and practical. Innovations in recent years include hands-free operation and pull-out or spring neck taps. No matter the style choice or desire for a specific feature, homeowners can find the kitchen taps right for their needs.

The first parameter guiding remodelers’ choices in kitchen taps is the existing plumbing. While some kitchens have wall-mounted taps, most kitchen taps are mounted to the kitchen sink.

If retrofitting to an existing sink, the homeowner has to know how many holes are pre-drilled in the sink itself, since water taps can have two supply lines (hot and cold) passing through two different holes, or only through one.

For sinks with a single hole, two choices prevail:

1. Monobloc taps — A single tube rises from the sink’s tap hole, with faucet handles on either side; many variations of monobloc taps are available, such as the fold-down spout when the sink sits in front of a window

2. Single lever taps — Instead of two handles, one lever directs quantity and temperature by angle and direction of the lever’s movement.

For sinks with two holes, the remodeler can choose to have two pillars — one hot, one cold — or a deck mixer tap, in which the two handles feed a common spout. 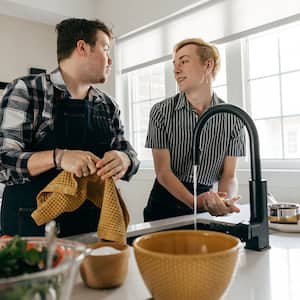 8 Types of Kitchen Faucets, From Minimal to Feature-Packed

Discover which type of kitchen faucet fits your fancy

While stainless steel is a very common choice and an excellent material for kitchen taps, other materials and finishes are available. Some manufacturers offer enamel colors such as orange, pink and gloss black. Traditional finishes for kitchen taps include:

Within each of the two main designs for kitchen taps, the homeowner can find many choices in design and application. Kitchen taps with high spouts are useful for filling large pots. Water taps with pull-out spouts on flexible hoses are helpful for washing food or filling pots away from the sink.

Some mixer taps and monobloc taps feature hands-free operation. This can be achieved in one of three ways:

• Touch-sensitive - A touch of the arm anywhere on the spout starts the water flowing at a temperature set by the faucet handle; this is especially useful when cuddling a baby or when both hands are crusted with pie crust.

• Motion-sensitive - Various manufacturers such as Moen place sensors in the spout, so a wave of the hand or a pot placed in the sink starts the flow of water; a regular handle allows temperature control.

Touch-sensitive and motion sensitive kitchen taps also make good health sense. A kitchen can offer many places for germs to grow, as shown in the Angie's List Kitchen Biohazards Study, where we examined the germiest places in your kitchen.

The modern crossroads of electronics and basic plumbing allow mixer taps and monobloc kitchen taps to have light emitting diodes (LEDs) in them, both to provide clues to temperature and light up the sink area. For touch-sensitive taps, the LED changes color from blue to red to indicate temperature.

The LED that colors the water as it leaves the spout may seem only a novelty, but the light can also be useful for clearly seeing vegetables or indicating temperature. These LED systems typically use button batteries in the spout nozzle. 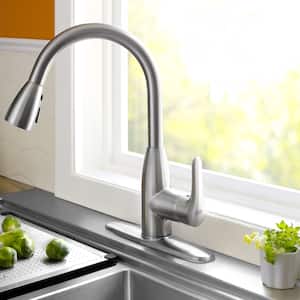 Pull-down faucets are a beautiful addition to any kitchen sink. Find out what pull-down features to be aware of during the buying process.

Fresh ideas in kitchen taps include advanced filtration, steaming hot water through the tap, and spring-neck taps with spray nozzles. For areas struggling with issues of water quality, changeable filters are as convenient as the availability of boiling water for that quick cup of tea or instant coffee.