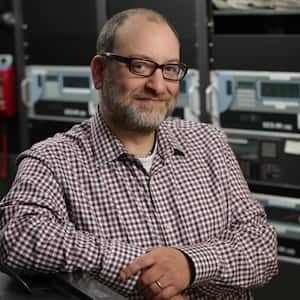 Here's why installing an home alarm system makes better sense than Fido for protecting your home.

Thinking about getting a large dog such as a Great Dane or a German shepherd to protect your residence? Or do you believe that the dog you already own will protect your life and property in the same way as a professionally installed security alarm system?

You need to reconsider.

While dogs are certainly beneficial for both companionship and protection, they're not a viable replacement for a monitored home security system installed in your home.

Some believe that simply having a dog is enough to deter a burglar, and while it may help as deterrence, it's not nearly as effective. Here are some reasons why:

A burglar can kill or incapacitate the dog

For dog owners, it’s a harsh reality that a burglar considers your pet a susceptible possession along with the other things in your house.

On October 20, 2015, the New York Post ran a story about a robber that broke into a Queens home and shot the family dog before making off with $4,000 in cash. That unfortunately was the second dog killed in a robbery that week. A home security system would likely have protected the victims much more effectively.

Homeowners board dogs or take them on vacation

While a dog may help you feel safe while you sleep, it won’t serve its purpose as a form of home security when you leave for vacation. Your home is never more vulnerable to burglary than when left uninhabited for stretches of days. And with modern home security systems, you can check in on your property virtually while he or she is away.

If the dog you rely on to protect your family is not formally trained as a guard dog, it may be useless as a form of home security. Many house dogs that are accustomed to visitors will not be alarmed by a burglar, and some have been known either to hide from a burglar or even attempt to cozy up to one. Relying on the dog you trust not to harm your children and friends to protect you from unwanted visitors is not a good strategy.

Trained guard dogs may be a liability

According to DogsBite.org and animal behaviorist Alexandra Semyonova, bringing an attack bred and trained dog into a home and hoping it will be a reliable family pet is a mistake. “The idea that the dogs will limit their attack behavior to the training field isn’t realistic,” says Semyonova.

According to attorney Scott Goodwin on Lawyers.com, “While a judge will typically side with a homeowner, it is still theoretically possible for a burglar to successfully sue (over a dog attack).”

There's no discount on home insurance

At the very least, you as a homeowner are introducing a liability risk and forfeiting an insurance discount by choosing to own a dog instead of a home security system.

Without video monitoring, you miss out on a substantial security advantage.

Angie's List members report that an elaborate security system may cost from $600 to $850 to install. The American Society for the Prevention of Cruelty to Animals estimates the average cost of basic care for a dog is between $580 to $875 per year — and that’s not even taking the initial price of the dog into account. 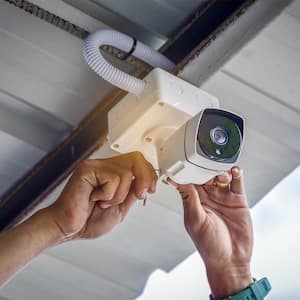 How Much Does It Cost to Install a Security System?

From hardwired to wifi, there are plenty of budget-friendly options to protect your family

Burglars can steal your dog!

As I indicated above, regardless of whether it's trained to guard or not, a dog is a considerable investment on its own. A dog is also one of a homeowner’s most sentimental possessions and is vulnerable to theft just like anything else in a house.

Contrarily, a home security system can’t be stolen and can protect the dog as well. 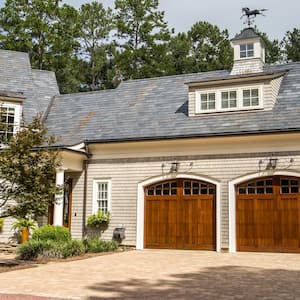 9 Easy Ways to Improve the Security of Your Garage

Get peace of mind by enhancing the security of your garage