Homeowners should install green energy before the end of 2016 for a 30 percent tax credit.

The solar tax credits have been extended but still shrink as the years go on. Solar systems placed in service by December 31, 2019 receive a 30 percent tax credit. The credit reduces to 26 percent in 2020 and and 22 percent in 2021, and is eliminated entirely after December 1, 2021.

As one of the most visible and common means of green energy, solar power represents one of the most effective options. Jason Bassett, owner of Arrow Roofing & Solar in Murfreesboro, Tennessee, says the average home uses 2,000 kilowatt hours of electricity per month, and a $25,000 solar system can offset most of that, with the homeowner recouping that investment through energy savings within five to seven years.

“The cost of solar has gone down a lot in 10 years,” Bassett says. “When I started doing solar, the cost of an installed array was between $7 and $8 per watt. Now it’s between $2.50 and $3.50 a watt. You’re getting more out of your dollar, and competition has really driven it. It’s not just a fringe thing any more. People have a desire to be more green.”

He adds that most solar systems carry warranties for 25 years and should last between 30 and 40 years. “After you get past your payback period, it’s pure profit,” he says. “There’s no downside to the investment.”

Remo Eyal, CEO of Superior Solar Systems in Altamonte Springs, Florida, points out that solar power frequently generates so much energy that it feeds the excess power back into the grid. “Your meter is running backward and reducing the bill,” he says. “The power company is paying you for the energy you’re providing.”

He agrees with Bassett that system prices have dropped greatly, but he thinks they’ve stabilized for the near future. “It dropped 75 percent over that past 5 to 10 years, and it’s flattened out over the past couple of years,” he says. “Unless there’s a huge technological leap, the prices will stay approximately the same for several years. So now is the time to buy.”

In addition to the federal tax credit, many state and local municipalities offer their own tax credits for renewable energy sources, so check into those options before installing a solar system.

Though wind power can provide plenty of power to a home, the unpredictability of the energy source, vagaries in local zoning codes and the logistics of effectively building a wind turbine pose serious challenges to using wind on the residential level.

“You have to have enough space to do it, and not all areas are conducive to putting a wind turbine 30 feet above any encumbrance,” says Joe Morinville, owner of Energy Independent Solutions in McKees Rocks, Pennsylvania. “There’s not really a good return on wind.”

Solar power also offers a higher rate of return on energy generation because heavy sunshine generates the most power during peak daytime demand, so utility companies prize that energy more than that generated by wind units during non-peak hours.

“The hottest, sunniest days of the year have the highest demand, and that’s when solar is generating the most power,” Morinville says. “Wind generates the most power during evening and stormy times, when demand is lower.”

Geothermal power, which harnesses buried loops to take advantage of the constant temperature several feet below the ground, varies greatly in cost, depending on location and property size.

A ground-loop system requires the most space but costs the least of the available options. A vertically drilled system, with pipes going straight and deep into the ground rather than out into a field, requires less space but costs more to install. Stonis says such a system costs anywhere from $15,000 to $50,000, and homeowners can expect to recoup their costs in 10 to 15 years.

Though the return on investment takes longer, Stonis calls geothermal heating and cooling an excellent option for homeowners who want to conserve energy. “It’s a big investment, but remember that you’re replacing two systems at once – both heating and cooling,” he says. Depending on local climate and how much you use the system, you can expect to save between $80 and $200 per month on energy bills with a geothermal installation.

Stonis advises anyone considering a renewable energy system to check their home’s energy efficiency, as well. 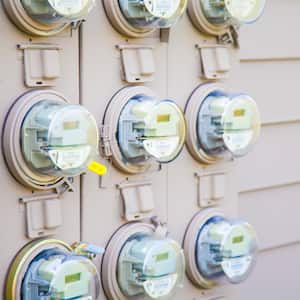 10 Energy Saving Tips to Save Money on Your Electric Bill

Do you suffer from sticker shock when you see your monthly electric bill?