Whether with a pro designer or DIY accumulation, build your own sports temple.

With the evolution of HDTV, many sports lovers now prefer the game day comfort of home to the stadium of their favorite team, and for some, that spreads beyond the main viewing area.

What makes the ideal “fan cave?” That’s up to you. 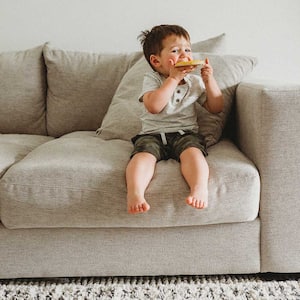 If your dream fan cave is beyond DIY capability, construction and interior design pros can deliver.

Designer Chris Jones replaced the large sectional couch’s legs with rollers for maximum versatility. The signed memorabilia wall includes team logos, designed on computer, cut out of Sintra PVC board and layered onto the surface.

A free-floating TV stand hangs on a decorative pulley system that Jones installed in his own home.

“I’ve done that a bunch of times,” Jones says. “If a client gets a new TV, it’s easy for them to unbolt the old one and install.”

“They’re a favorite of mine, whether it’s a kids’ basement or family area,” Jones says. “They’re only like $40 nowadays.”

Jones created a custom shelving system and twin refrigerator set-up with rolling wooden doors. He also put wheels on everything potentially mobile, including the air hockey table, so the homeowner can move items with ease.

“Some clients have a tight budget and others will spend whatever,” Jones says. “We work with both to give them what they want.”

DIY – whatever works for you

You’ll find most fans’ sports-themed items confined to a single area of the home. Die-hard Indianapolis Colts supporters and For the Dogs! owners Ray and Diane Bridges, aren’t most fans.

Diane, one-time business manager of the Colts' official fan club, was inducted into the Pro Football Hall of Fame in 1999 as the team’s "ultimate fan." Ray co-owned a Guinness World Record when he watched 70 straight hours of football in a Dish Network contest that landed the couple at the Pro Bowl in Hawaii. The Colts even let him bring a tuba – signed by dozens of players – to his seat at every game.

There’s Colts stuff throughout their home – inside and out, including the living room where the couple watches their beloved team when it’s on the road. An adjoining bedroom became their true fan cave, with a trove of game-used gear and signed memorabilia, three decades of Colts paraphernalia and a model train with a handmade replica of Lucas Oil Stadium.

“We never thought we’d be doing anything like this,” Ray says. “Little by little, year after year, it adds up.”

If you want to take your fan cave to the next level, consider the following:

Your fan cave can have the same turf the pros play on. There’s old-school Astroturf or modern field turf, and both come in a rainbow of colors, if you want to match with your favorite team.

Prices range from around $1.50 to $5 per square foot, depending on type and quality.

Functional or not, these make a cool addition to any fan cave with the right wall space. While most football scoreboards are too big, baseball and many old basketball scoreboards fit nicely.

A local high school or middle school could have a decommissioned one just sitting around for you to take, or they can tell you when one's up for replacement. At vintage shops or auctions, they run anywhere from a few hundred bucks to over $5,000 for rare models.

These make a great covering for feature walls, or tabletops covered by glass. They’re also pretty cheap, as overproduction in the late 1980s and early ‘90s crushed dreams of retirements funded by baseball cards.

Are you proud of your fan cave? Tell us about it in the comments section below.