The Charm of a Victorian House

Queen Anne homes were the most common of the Victorian house styles built in the U.S. from 1880 to 1910, after which their complex, ornate style began to decline in favor of simpler architectural designs. You can find Victorian houses in cities, suburbs and rural areas across the country.

The style became Americanized with a more open and spacious floor plan, porches and verandas, a lighter frame construction, and more frequent use of exterior wood shingles rather than English tiles or stucco.

Characteristics of a Queen Anne Victorian

The Queen Anne style has an asymmetrical and complex overall shape that includes a steeply pitched irregular roof that often has multiple intersecting gables and decorative touches such as roof finials and crestings.

Queen Anne homes were highly individual, with no two the same, and several subtypes of the style exist. Also, newer Queen Annes tend to be less complex than the earlier houses. However, other common characteristics of these Victorian houses include:

• A variety of colors and textures used throughout the entire house.

• Octagonal or circular towers or turrets.

• Large projecting bay windows that were often highly decorative, including the use of beveled, etched or stained glass.

• Entry doors with a large glass panel in the upper part of the door.

• Wall carvings and/or inset panels of stone or terra cotta.

During the Victorian period, people painted their Queen Annes in a rainbow of earth tone colors, but later owners mostly returned to all-white exteriors, until the 1960s and 1970s, when a few people began using colors again. Today, in some cities Victorian houses are commonly painted three or four bright colors. 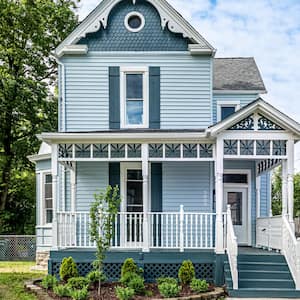 Go bold and bright or classic and subdued

Maintaining and renovating a Victorian house

Their complex roofs, multiple chimneys, and windows require ongoing maintenance. Wood exteriors and trim need to be painted regularly. Old porches are prone to sagging, cracking, buckling or rotting, although keeping gutters clean can reduce the risk of water damage to porches.

Restoring a Queen Anne is likely to be a major and expensive project, potentially taking up to two or three years, depending on the condition of the property.

For the best results, consult an architect or designer who specializes in historic preservation. You'll need to work with a variety of contractors, depending on the type of work that needs to be done.

Many people buy Queen Annes because they want to restore the houses. Victorian purists believe if you don't want to keep the houses close to their original design, you should look for other housing options and not make renovations that change the basic nature of a Queen Anne.

Of course, the choice is yours, and some houses may require renovations to bring them up to modern living standards.