Question by sgc: basically crawl space under an old ranch home and the main support beam is rotting and we are trying to get an idea of what it should cost to replace. will house have to be jacked up or other method? Should we replace with another wood beam or change to something else. etc..

Answered by LCD: Depends on a lot of things of course, as indicated in the first response below. Following are links to a number of previous similar questions which should give you an idea of the solutions and rough ballpark costs.

You need a remedial design from a Structural Engineer (or Architect with engineer doing that for him). Unless some remodeling is going to be in the picture too, just a Structural Engineer should be able to do the design and plans (commonly including replacement methodology) to be able to get a building permit for this, and for bidding contractors to bid and eventually build to.

How much should it cost to replace support beam in basement

As for replacing with wood or something else and how it will be fixed:

Generally the floor joists which the beam typically supports will be jacked up with posts and straddle beams or screw jacks - normally only an inch or so up and supported, then disconnected from the beam, the old beam pulled or cut out (usually cut out in pieces for ease of handling), then the new one put in place and the floor joists connected appropriately. For a typical beam sitting on top of a notch in the foundation wall they will usually just come through a section of the outside siding which has been temporarily opened up (hopefully without damaging the siding so it can be put back to avoid having to try to match new siding to the old).

In some cases, it is easier to jack the entire house up a bit more than the "depth" of the beam to allow it to be put in easier - but generally a hole in the wall or even cut in the top of the foundation to swap out the beam is faster and cheaper.

As for the change of materials issue - if the beam is rotting I would say you need to solve the cause of that as part of this job (though maybe not with same contractor if you do not use a General Contractor for the beam part).

Cause could be high moisture from leaking water pipes maybe (usually causing a localized rot problem), or maybe excessive groundwater wicking into the crawlspace or improper exterior drainage letting surface water in, or sometimes just poor ventilation due to inadequate exterior screened vents or someone, for instance, blocked them off because the floor was cold. Solution to those issues commonly means regrading exterior areas and maybe putting in gutters to keep water away from the foundation, sometimes a sump pump in the crawlspace, commonly putting in heavy duty vapor barrier on the ground surface and fastened to the foundation wall with an airtight seal.

And of course the other crawlspace framing and any piping should be inspected by the engineer while he is under there, and repaired or treated as appropriate, because if general crwlspace moisture caused this you may have other decay going on under there.

Would be an excellent time (before the structural inspection is done) for an insect inspection too, though any treatment would have to be integrated with the work to avoid exposing the structural repair workers to poisons.

Certainly a steel beam would normally last longer - but unless multi-coat custom epoxy or urea or vapor-deposition coated with corrosion-preventative paint prior to installation, it would still be affected by high moisture - just rust rather than rot, unless you went to the somewhat higher expense of getting a self-protecting corrosion-resistant steel like Cor-Ten. It is also possible to buy treated wood beams, or to have the contractor treat it (though not effectively as factory treatment) to inhibit decay and any insect attack, but what you can buy off-the-shelf in treated beams do not have the thype of high concentration treatment you used to be able to get, so I wouldnot count on that as your complete protection.

The Angie’s List Answers forum ran from 2010 to 2020 and provided a trusted space for homeowners to ask home improvement questions and receive answers directly from Pros and other users. Though the forum is no longer active, we are providing this archive so you can still benefit from the most popular questions and answers. Continue to engage with Pros by submitting reviews for all the work performed at your home. 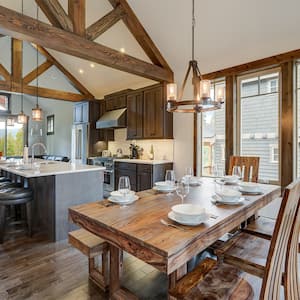 How Much Does It Cost to Replace a Rotted Support Beam?

Replacing a rotted support beam will cost an average of $3,250 depending on the material, cause of the damage, and structure of your home