Are You Ready to Live in a Smart House?

Home automation or a “smart home” allows homeowners to connect — through wires and cables or wireless signals — a variety of systems throughout their residence and control everything from a central location, such as a smartphone, tablet or in-wall touch screen. A study by the Joint Center for Housing Studies of Harvard University says home automation is predicted to be the No. 2 trend in residential remodeling over the next five to 10 years.

“There is massive interest in home automation,” says Dave Pedigo, senior director of learning and emerging trends for the Custom Electronic Design & Installation Association, based in Indianapolis. “We are at the tipping point for the automated home, and that growth over the next decade will be exponentially larger year over year.”

Experts say the most popular systems to integrate include audio/visual equipment and home theaters, heating and A/C, and security and lighting. Kellan C. Warren, vice president of Kelltech Systems in Dallas, says his business is growing.

“The past five years has seen the industry become more available to more people,” he says. “Before, it was just in the million-dollar homes. Now we’re doing a lot of automation in $400,000 homes because it’s becoming much more affordable and accessible. Prices are coming down and the number of products that work together is increasing.”

What home automation can do for you

At 6 a.m., the home automation system wakes him up with soft music and dim lights. As he gets out of bed and begins his morning routine, the lights get brighter and the TV turns on with the local news. And when Bernard leaves for work, everything turns itself off and the security system switches on to guard his house.

When he returns home, sensors in his driveway activate the system, which turns on music from the outdoor speakers, the waterfall in the landscaping, and interior and exterior lights if it’s dark.

“My house greets me,” Bernard says of his Charlotte, North Carolina abode. “I’m surprised home automation isn’t in every home — even if it’s as simple as lighting control. It saves on electricity, protects the home and is convenient.”

Bernard says he always knew he wanted to live in a smart home, and hired Entertainment Technology in Iron Station, North Carolina, to tackle the project during a recent renovation.

“My favorite part is peace of mind,” he says. “I go out of town every chance I get, and knowing my home is just a click away is great.”

Bernard says he spent about $6,000 for his Control4 system, and has plans to add automation for his window blinds and irrigation. Control4, based in Salt Lake City, is one of the largest providers of automation systems, according to industry experts, and works with more than 7,000 electronic devices. 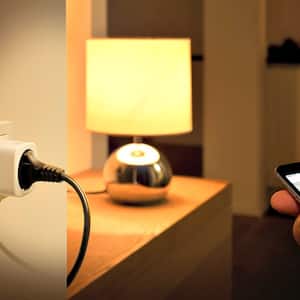 Affordable home automation systems start around $100. All you need is a smartphone and Wi-Fi.

For those who want to test the waters of home automation before jumping in, simpler options exist, such as installing a Nest smoke and carbon monoxide alarm. The alarm, priced at $129, speaks with a female voice, telling the home’s occupants what the problem is and where it’s located. Before it sounds a piercing alarm, it gives a verbal warning that can be silenced by waving your hand. It integrates with mobile devices and sends a message if an emergency arises or the batteries run low.

Nest, based in Palo Alto, California, introduced its first product, the Learning Thermostat, in 2011. Retailing for $250, the thermostat creates a custom climate control based on the homeowner’s schedule, and saves up to 20 percent on heating and cooling bills.

“With our first product, we set out to help people reduce home energy use,” says Tony Fadell, Nest’s chief executive officer. “Now, we’re turning our attention to keeping families safe in their homes.

“We’ve all experienced the smoke alarm going off while we’re cooking or searched for the source of that incessant low-battery chirp,” he adds. “Every time a smoke alarm cries wolf, we trust it a little less, and then — in a moment of frustration — we rip the batteries out to stop the beeping. And that leaves us and our families at risk.”

According to Nest, if you’re comfortable changing a light fixture, you should be able to install its products — otherwise hire a professional.

How much does home automation cost?

Home automation systems can run the gamut from fairly basic to extravagant and range in price from $2,000 to $200,000.

“Turning on your exterior lights at sundown and off at dawn would be the most basic,” says Brent Wilson, owner of Ambiance Audio|Control|Video in Omaha, Nebraska. “At the other end, I’ve had clients who pushed a button over the bed each morning, which raised 52 shades, set lighting scenes, started a music playlist based on the day of the week, turned on stock feeds on some TVs and views of surveillance cameras on others, unlocked elevator access to their floor of the building, and adjusted the thermostat. When they were ready for bed, Brahms’ lullaby played over 10 sets of speakers and lights controlled by motion detectors gently lit the way back to the bedroom. Such bliss.”

Warren says home automation systems can be integrated into both existing structures and new construction, with some custom builders automatically including integrated systems in their designs.

“We may have to do some cabling if we’re working on a house that’s already built, especially if we’re installing speakers,” he says. “But we shouldn’t have to modify the house in any way. I put a system in a house that was built in the 1920s, and you’d think it had been there all along.”

The home automation systems are modular, Warren points out, and homeowners can automate one area of the house at a time.

“As your budget allows, you can add on,” he says. “People come back all the time to incorporate more rooms.”

Video: How Home Automation Can Save You Money

What are the benefits of home automation?

A simple surround sound system can be installed in as little as one day, but large, complex home automation systems can take weeks of planning and programming, says Rene Robaina, president of Home Technology Solutions in Matthews, North Carolina.

In addition, homeowners may also check with their insurance companies to see if they’re eligible for a lower rate.

Consumers who fear they may not be tech-savvy enough to operate an automation system shouldn’t worry, Warren says.

“It doesn’t come with a big manual or extensive instructions,” he says. “If I’m doing a full training, after about 30 minutes — at the most — you should get it. But they are complex systems, and if a problem does arise, I can connect remotely and fix it.”

Wilson says with today’s smartphone and tablet technology, homeowners should have no difficulty operating a smart house.

“An automation system is just a computer that runs your home systems. So much like your laptop, it will occasionally need to be rebooted or need minor maintenance,” he says. “The idea is to make things more intuitive, so while being tech savvy doesn’t hurt, it isn’t required.”

While building a new home, Chris Williams of Mansfield, Texas, embraced the technology when he hired Kelltech Systems to design and install a $15,000 home automation package.

“I like efficiency ­— it’s a big thing for me,” he says. “If it’s 100 degrees outside, I can turn my A/C up while I’m away and then turn it back down to a comfortable temperature before I get home.”

“Safety is also very important,” he says. “When I’m away at work, if something happens at home I can see who’s at the front door or in the driveway. If someone rings the doorbell, I can pull up the system and see who it is and talk to them if I need to.”

Williams says he’s never had a problem with his system, and plans to extend it to integrate his new pool’s lighting, TV and audio.

“I would definitely recommend home automation,” he says. “Even if it’s something as simple as ceiling speakers — it’s a game changer.”

What does the future hold?

“There are a few things that people are looking for, and most of the time it’s an easy-to-use interface that allows you to control the home remotely,” says Brent Metz, owner of Hooked Up Installs in Vernon Hills, Illinois. “The ability for the home to efficiently run itself without constant human interaction and linking all the different subsystems in the home together is what home automation is all about.”

Whether it’s combining all your TV and stereo remotes into one, or having window shades open and close automatically according to your local sunrise and sunset times, Robaina says it’s an exciting time for industry professionals as more products become accessible for the average customer.

“The interest is growing exponentially,” he says. “Today’s first-time homebuyer was practically born with a phone in their hand — they almost expect the technology from their house. I think the next five to 10 years is going to see a huge growth in home automation.”

Editor's note: This is an updated version of an article originally posted on January 17, 2014.

What smart technology do you use on a daily basis? Tell us about it in the comments section below.